On Monday 5th of March St Mary's Eaton Bray was blessed by a visit from Rebecca Baldock whose work, at Kagando Hospital in Uganda, we have been supporting throughout 2006. Rebecca has returned to England for her annual holiday and to share in the celebrations, in York, of her sister's 18th birthday but she took the time out of a busy schedule of talks and appearances to come to Eaton Bray to say 'Thank you' for the support the Hospital has received from this community.

In a fascinating illustrated talk, that included pictures of the beautiful landscape and wildlife, she brought home, with personal stories, the enormous need that the Kagando community addresses. Among heartbreaking stories Rebecca gave us some inspiring examples of the hope that Kagando is bringing to the local people. And she described how Christian community who run the hospital witness to the power of prayer in meeting their needs.

Rebecca described the ways in which money donated from our villages has aided Kagando Hospital. Some of the equipment is literally life saving and as a result of our support the hospital's two intensive care beds are now equipped with some of the basic equipment, such as a blood pressure monitor and an oximeter, that we take for granted with the NHS. Whist this equipment is vital for the hospital more basic needs have also been met by our donations - a simple path has been built that replaces the steps and rough ground between the main surgical wards and the physiotherapy department. As a result there is no longer a problem getting wheel chairs between the two and patients on crutches or callipers are now able to reach the physiotherapy department. 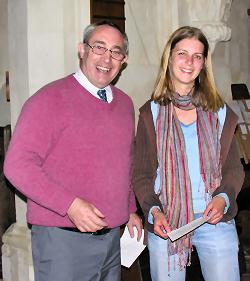 At the end of the evening Rebecca was presented with a cheque for £2,060, bring the total amount donated to Kagando by the congregations of St Mary's and All Saints Dagnall from their fundraising activities in 2006 to £5,291. She was so very thankful and carried with her the thanks of many of Kagando's nursing community.

Apart from an occasional letter this will be the last regular entry in from Rebecca, but if you want to follow her story you will be able to read her monthly newsletter on the St Mary's website. If you would like to make a donation to Kagando please get in touch with Gordon Gray or Rev Malcolm Grant.