Parishioners from St Mary's, Eaton Bray and Edlesborough, have raised more than £6,000 in eight months for the Chilterns MS Centre at Halton in Bucks.

The centre was the adopted charity for the church in 2007. 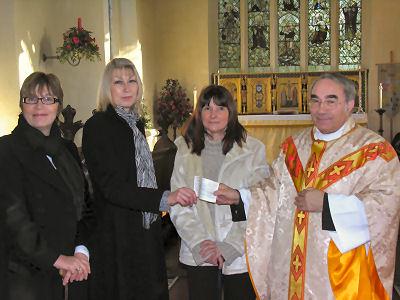 Led by vicar and rural dean, the Rev Canon Malcolm Grant, the parish has been supporting charity projects for the past four years and last year's effort is their best yet despite also fund-raising to pay for essential repairs to the medieval church building.

Mr Grant said: "The amount of money raised by people's hard work and generosity has far exceeded what we hoped for. For the past four years, we have had an annual parish project to raise funds for charities and concentrate efforts to make a real difference to people's lives rather than giving lots of little donations. This has been the best effort yet. People have been extremely kind hearted in their giving to others and this is the heart of what Jesus taught."

The Chilterns MS Centre, which is a registered charity, offers treatment and support to people with multiple sclerosis.

A team of professional staff treats 200 people each week at the centre and aims to keep patients as fit as possible, offering high density oxygen therapy, physiotherapy, complimentary therapies, and practical help with wheelchairs and benefits advice. It also offers support to families and carers.